The delinquents are a group of students who currently stand near the incinerator.

The delinquents all have styled blond hair and scars on their faces. They wear the default male uniform but with the jacket open, revealing casual t-shirts underneath. They stand to the left just outside of the incinerator area.

Between the April 15th, 2017 and April 26, 2018 builds, if the Space Bar was rapidly pressed ten times in front of them, they wore Team Skull Grunt bandanas and performed the Team Skull Grunt dance animation, inspired by the Pokemon franchise.

The delinquents hang around to the left of the incinerator area outside of class time around a radio. If Ayano walks near them, they will periodically call her out. If a delinquent sees her carrying the cello case, their dialogue will change to mocking comments related to it.

If they witness the murder, or corpse of a bully, they will react like a Spiteful student.

If a delinquent sees Yandere-chan kill another delinquent, or the delinquents didn't bring their weapons to school due to Ayano reporting them to the guidance counselor for being covered in blood, they will react to murder with the Heroic Persona.

Ayano can sneak corpses past the delinquents either by hiding a dismembered body in the cello case, trash can or by pushing a student off the roof directly into the dumpster below.

They will not give Ayano a reputation penalty if they see her bloody or insane but will instead comment on her state.

If Ayano attempts to talk to them, they will respond rudely and will not be affected by seduction.

As of the August 15, 2019 build, Ayano can now join the delinquents. In order to join, her reputation must be -33 or lower, her hair must be dyed blonde, she must currently be using the Tough Persona, and she must have completed the tasks for each delinquent. If all of these requirements are met, Ayano can speak to Umeji about joining the delinquents.[1]

If Ayano joins the delinquents, her reputation will be capped at -33. She will also gain the ability to "Intimidate" students, which accesses the "Favors" menu without befriending a student but incurs a reputation penalty.[1]

All delinquents have the Violent persona. If Ayano walks too close to a delinquent with a weapon, they will ready their fighting stance and if she comes any closer, a combat minigame will begin. The player will have to press the three buttons that come up in succession once the game has begun, until either the delinquent or Ayano is too injured to fight. If the delinquents see Ayano murder someone, or she is trying to dispose of a corpse, they will continue fighting her until she is knocked out, or until she kills them. If Ayano bumps into a delinquent too many times, they will assume she wants to fight and take up a fighting stance.

If Ayano defeats a delinquent in a fight, he will drop his weapon and leave to sit near the bench near the incinerator.

As of the August 15, 2019 build, a delinquent for whom Ayano has completed a task will no longer be aggressive towards her or start a fight with her.

Gaku being beaten by Ayano.

Gaku being kneed by Ayano.

An injured Umeji Kizuguchi. April 26th, 2018.
Add a photo to this gallery

The delinquents will arrive at school last in a group, and will purposefully be late to class.[2]

At 7:20 AM, the group enters school grounds. They walk to their lockers at 7:30 AM and change from their outdoor shoes into their indoor shoes. At 7:40 AM, they walk to the incinerator.

variation n° 4
Add a photo to this gallery

Once the list is complete, Ayano must talk with Umeji Kizuguchi to join the delinquents. Once in the gang, Ayano will wear a mask around her mouth. You can press Left Alt to change the design.

The benefit of joining the delinquents is making students Follow, Distract, and Go Away through Intimidation (With the exception of Student Council Members (Who are immune to everything from Ayano), Borupen Saishiki (Who would be immune to intimidation in the future), and Osana Najimi (Who refuses to follow Ayano, as she hangs out with Raibaru. Even if Raibaru is gone, she still refuses to follow the player, because she doesn't trust her enough. However, distracting or telling Osana to go away through Intimidation still works). However, if this method is used, you will receive a reputation penalty. When you're a part of the delinquents, your reputation will lock at -33% unless you leave the gang or your reputation decreases more every time you're caught doing suspicious activities by normal students.

Club Activity and club rules are still the same. The delinquents hangout around town, thinking of ways to defy authority.

However, she will be evicted if she fails to hang out with them at least once a week.

Ayano can ask permission to leave the gang. Once she leaves the gang, she will not be allowed to re-join.

Originally, all the delinquents except for Osoro were being bullied to the point of considering suicide. They joined Osoro after seeing her singlehandedly take on multiple delinquents from another school, who sought to humiliate her. They idolized Osoro for this feat and began to imitate her after realizing that a fearsome reputation kept bullies away.

Kocho Shuyona wants to expel them all, but Genka Kunahito requested to reform them and has been given ten weeks to do so. If she fails, they will all be expelled, and Genka will be dismissed from the school.[3]

The delinquents from New Delinquents in Yandere Simulator.

Silhouettes of the male delinquents.

The delinquents in Yandere Simulator Delinquent Backstory.
Add a photo to this gallery

The male delinquents in the “Delinquent Update Trailer”.

The delinquents' hair models by Qvajangel.

The leaked image of the previous female delinquents. Found in the folder of the January 1st, 2016 Build.

The previous male delinquents preparing their own weapons. 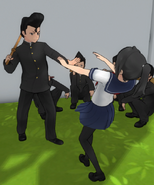 Copper Streak puts the player in a coma.

The previous male delinquents wearing the Team Skull masks.
Add a photo to this gallery

Retrieved from "https://yandere-simulator.fandom.com/wiki/Delinquents?oldid=496452"
Community content is available under CC-BY-SA unless otherwise noted.