Customization is a way to change Ayano Aishi's, Taro Yamada's, the students' and Akademi High School's appearance in Yandere Simulator. It is also used for gaining Panty Shots.

Press the H key to cycle through hairstyles.

To go back one hairstyle, hold the H key and tap the left arrow key.

Press the < and > or , and . keys to decrease or increase Ayano’s bust size, respectively.

Press the P key to cycle through eyewear. This also gives you panty shots, with 5 panties for each accessory.

Press the O key to cycle through miscellaneous accessories. 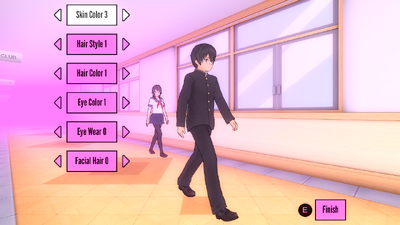 As of the August 15th, 2015 Build, Senpai is once again customizable. When the player starts a new game, they are asked whether their ideal lover is male or female. Since the female Senpai hasn't been implemented yet (and won't be for the next couple of months, as of October 2015[1]), the player must choose to have Senpai be a male student. A female Senpai can be made by modifying the game, but she will still have a male voice for certain things. The starting screen shows the default Senpai, but naked with steam covering his genitals.

As of the September 2nd, 2017 Build, the customization screen now features Ayano stalking Senpai through a hallway.

If Senpai is female, then her bust size and stockings will be customizable, along with most of the other customizable options of male Senpai.[2]

Uniforms are able to be customized before the game starts.

For male students, the following uniforms are available:

Male Uniform 4: A white shirt and red tie with a tan blazer worn over, with blue plaid slacks (beige on the customization screen) and brown shoes.

Male Uniform 5: A white shirt and bright red tie with a bright red-lined black blazer worn over, with black slacks and brown shoes.

Male Uniform 6: A white shirt and tie worn under a dark grey blazer with dull red stripes, with white slacks and black shoes.

For female students, the following uniforms are available:

Uniform 1: A navy and white seifuku with a red knot, matching navy skirt, and black shoes.

Uniform 3: A high collared white blouse worn under a yellow vest and red bow, with a tan skirt lined with maroon and brown shoes.

Uniform 4: The principle design is the same as Uniform 3, but with a red-lined tan blazer instead of a vest.

Uniform 6: A dark grey long sleeved seifuku with dull red stripes. The skirt is white and the shoes are black.

In the future, there may be a female uniform with a dark grey skirt, a light grey blazer, and a neon blue bow tie.[3]

There may also be a female uniform that is a dark long sleeve sweater with a white collar, and a purple skirt, which is the outfit worn in a popular fan PV for the wowaka song Rolling Girl.[4]

In the future, the original concept of what YandereDev thought the uniform should look like could become the default uniform. YandereDev held a poll to ask the public and fan opinions of the design.[5]

The player is able to customize the students, rivals, and the school however they would like.[6] YandereDev would like to include the ability to designate who the rival is.[7]

Start a Discussion Discussions about Customization