Crushing is an elimination method in Yandere Simulator.

On the scheme menu, the description is, "This scheme will end with your rival being crushed."

In the future, the player will be able to drop a cello case off the rooftop to crush any student below.[1] The cello case will weigh 15 pounds, enough to kill someone from above.[2]

If the player puts five dumbbells in a bucket, then they can dump them onto any student standing behind the school, effectively killing them. This requires a physical strength level of at least one. In order to get the student into the correct position, you must write a note to them about a topic they would be interested in, and then choose to meet them either in front of the school or at the outdoor eating area. 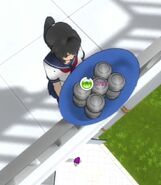 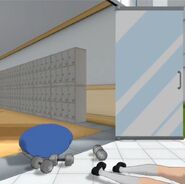 The player may be able to crush a rival by getting the floor above the student to collapse on her.[3]

The player will need to lure her rival to the front of the school, rush to the roof, and drop the weight on them. Note: The weight is rather large so it may bounce off the school walls and miss your target entirely.

Since the release of 1980s Mode, it is possible to crush a student with a bookshelf. The player will need to lure her rival behind a bookshelf in the Library, and then go to the other side and push the bookshelf, which will fall on the student, killing them. 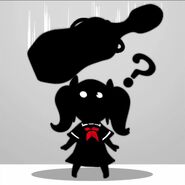 Sprite art for crushing, from "Yandere Simulator: Past, Present, and Future".