The circular saw is a weapon in Yandere Simulator.

Ayano cannot use the saw when fighting a Heroic student and will automatically lose, as the weapon is too unwieldy to use in close quarters.

The saw can be placed inside the cello case or the trash can in order to conceal it.

In the future, if a student spots Ayano holding the weapon while she is not a part of the club, they will call her a thief and will take the weapon from her. Student AI and path finding will have to be revamped before this happens.[1]

As of the March 5th, 2016 Build, Ayano cannot give the circular saw to a mind slave.

Dismemberment with a saw was implemented in the February 15th, 2016 Build. Once a student is killed, Ayano can carry, drag, or dispose of the body. If she is armed with the circular saw, she can dismember corpses by pressing the E key. During the dismemberment animation, she will slice up the body into six sections: right arm, left arm, left leg, right leg, torso, and head. Her sanity will drop. Ayano can also put the dismembered body parts in the cello case to hide them. 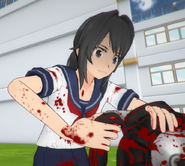 In the middle of dismemberment.

Finishing with the saw.
Add a photo to this gallery

There are 4 killing animations depending on Ayano's level of sanity. 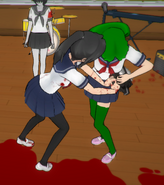 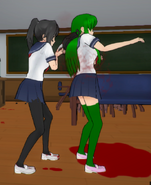 Stealth Kill.
Add a photo to this gallery 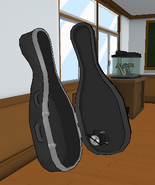 The police finding a corpse that was killed by a circular saw.

WIP of Ayano attacking a student with the circular saw. 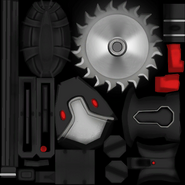 Texture of the circular saw from the game files.
Add a photo to this gallery

Retrieved from "https://yandere-simulator.fandom.com/wiki/Circular_Saw?oldid=498296"
Community content is available under CC-BY-SA unless otherwise noted.