Buckets are key tools used for cleaning up blood and soaking and crushing students.

Buckets are located around Akademi High School, in the bathrooms, in the Gardening Club, and at the Pool. They are all blue, oval-shaped, and highlighted cyan in Yandere Vision.

Ayano Aishi can only carry one bucket at a time.

During Cleaning Time, students will not see the bucket as suspicious. However, if it is any other time of day, Ayano will lose 10 reputation points if spotted carrying a bucket by a student (Excluding Senpai and Teachers).

When murdering an NPC with a weapon, the victim will spill blood on the ground creating a puddle of blood. Ayano must use a bucket, mop, and bleach to clean up all the bloodstains to avoid a decrease in School Atmosphere. The more blood that is mopped up and dipped into a bucket, the bloodier the water in the bucket will get. If the water becomes bloody, it will have to be refilled to continue mopping. 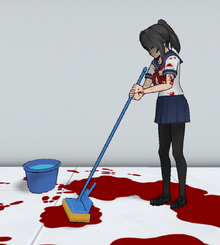 Without panty buffs, one corpse is enough to make the water bloody. If Ayano sets a trap on a doorway, any students that get doused with liquid will run to their corresponding Locker Room, change into their gym uniform, and proceed with their normal routine. Previously, when Kokona was the only student who could get wet, she would bathe in a large bathtub that has now been removed.

Senpai dodge the bucket near the door.

Reina dodge the bucket near the door.

Shiromi dodge the bucket near the door. 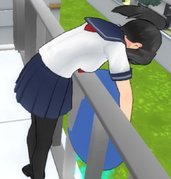 Kokuma got splashed with gasoline. August 1st, 2020.
Add a photo to this gallery

In the future, the police may think that a rival killed someone if they have bloody clothing in their locker after changing.[1]

There is a large stack of buckets in one of the first-floor girls' bathrooms that Ayano is able to stand on. While Kokona Haruka is using the bathroom, Ayano can dump water, blood, or gasoline on her. This is a set up for an electrocution elimination method.

Ayano can use the wood chipper to dispose of corpses. Once a corpse is placed inside, the machine will grind it up and let out blood into a bucket placed beneath, filling the bucket with blood.

Two buckets can be put beneath, but when the machine is activated, only one bucket will be filled with blood.

The machine cannot be activated if there is no bucket underneath.

Ayano can empty gasoline from a jerry can into a bucket. She can then splash a student with gasoline from the bucket. If the student makes contact with a candle or match while doused with gasoline, they will catch on fire and burn to death.

If Ayano puts five dumbbells into a bucket, she can drop it off the rooftop to crush students who are convinced to go to the back of the school or outdoor cafeteria via a note.

Bucket with dumbbells. June 15th, 2016.
Add a photo to this gallery

Retrieved from "https://yandere-simulator.fandom.com/wiki/Bucket?oldid=497379"
Community content is available under CC-BY-SA unless otherwise noted.