View source
watch 04:03
Wiki Targeted (Games)
Do you like this video?
Play Sound
Befriending is our Article of the Month for October 2021!

Befriending is a non-lethal method used to eliminate rivals in Yandere Simulator.

On the Schemes menu, the description is: "This scheme will end with your rival being befriended."

Befriending a rival involves performing a task to put them in your debt, and asking them to repay it by stopping their romantic interactions with Senpai

The player is currently only able to befriend Osana Najimi.

As of the September 19th 2020 build, the player is no longer able to befriend Kokona, as Osana is in the game, making Kokona's task useless.

Before the September 19th 2020 build, Ayano Aishi had to first perform Kokona's task. (Which is providing her with a modified uniform using the sewing machine in the Sewing Room.) On Monday during the lunch period, Ayano had to eavesdrop on a private conversation Kokona has with Saki Miyu on the rooftop. This would grant Ayano the ability to write a note for Kokona and put it in her locker, asking Kokona to meet her, for this elimination method, on the rooftop.

When Kokona was on the rooftop, the player could push her off, but they could also choose the "Offer Help" option. When help was offered, Kokona would talk about how her father is in debt because of the loan shark company "Ronshaku Loans", which is run by the Ronshaku Family.

The player had to kidnap the daughter of the Ronshaku Family, Musume Ronshaku, after which, a video camera on a tripod would let Ayano record a video of Musume begging for help, tied up in Ayano's basement. Ayano sends this video to Musume's father, negotiating with him about his daughter's fate, threatening to remove one finger from Musume's hands per day unless all clients of Ronshaku Loans are released from their debt to the company. At first, he would protest, saying that the company would go bankrupt if he met Ayano's demands, but after Ayano made the threat about Musume, he would agree to free his clients from debt in return for his daughter getting set free unharmed (Musume was traumatised by the incident, and would return to school, but not participate in bullying.)

Once Kokona's father was free from debt, Kokona would send Ayano a message announcing it. This started a conversation between the two, and Kokona thanked Ayano. Ayano would ask her to come to her house tomorrow before school, and Kokona would agree before thanking Ayano again. At midnight, she would knock Musume out, and leave her outside of the Ronshaku Loans building. She would then go to sleep and wait for Kokona's arrival. After she arrived, A cutscene would play where Kokona would talk with Ayano in her living room (Not seen outside of the cutscene at time of writing.) She will speak about her hatred for loan sharks, give context on Saki's task (finding her bra), and express regret for getting her involved.

At one point during the cutscene, Ayano will walk behind Kokona with her hands outstretched. The player has the option of betraying Kokona while her back is turned, though there are only a couple of seconds for this opportunity.

Kokona talks about Ronshaku Loans and that loan sharks are awful people.

Kokona promising to stay away from Senpai.

After sitting back down, Ayano then confesses her feelings for Senpai to Kokona, and begs her to stay away from him, Kokona hesitates but ultimately decides to adhere to Ayano's wishes. The cutscene then ends, with Ayano successfully befriending Kokona.

In order to befriend Osana, the player must complete Osana's task of finding her phone charm in the hedge maze. At 7:30 AM, Osana gets a phone call from her stalker. Telling Raibaru Fumetsu that she should take the call in private, she will run to the bathrooms (where Raibaru will watch from the corner,) and answer her phone. She will threaten to contact the police, to which the stalker (inaudible to the player) threatens to kill her pet cat. Osana agrees not to inform the police, and hangs up. During cleaning time, Raibaru will talk with Osana on the rooftop. Osana will tell Raibaru about her stalker, and Raibaru will offer to stop him, to which Osana expresses distress. After listening to both conversations, Ayano can put a note in Osana's locker. The note must have stalkers and blackmail as the reason, or Osana will not be interested. After offering Osana help, She will reveal to Ayano that her stalker has her pet cat hostage, and give her his address. At night, Ayano can go to the stalker's house. She has two options for entry.

After entering the house, Ayano must avoid walking into the line of sight of family members, or stepping on chip packets, which will alert the family. Once in the stalker's room, Ayano must avoid detection by finding a way around the chip packets, pickup the cat carrier, and then escape the room without detection. If Ayano treads on one of the chips, or touches the stalker, he will shout at her, before running towards her and starting a struggle minigame identical to the minigame triggered when a heroic student sees Ayano commit murder. If the player loses, Ayano will be pinned to the ground, and a game over will occur. If the player wins, Ayano will knock the stalker unconscious. Ayano will then flee the house, Osana's cat held safely in her hand. After a brief text message exchange, Osana is more than ready to report the stalker. However, before contacting police, Osana will realise how long the process could take due to factors like trial. She decides to visit Ayano and pick up her cat before starting the process to prosecute her stalker. Osana will arrive at Ayano's house, and a cutscene (not animated at time of writing) will play. Osana will speak for some time, continuing as Ayano pours them both tea. (Note: During this moment, Ayano has the option to drug the tea she is going to give to Osana. For this outcome, see Betrayal.)

Osana talks about her stalker and her cat been rescued by Ayano.

Osana promising to stay away from Senpai.

Ayano gives Osana her tea, and sits back down. Ayano then confesses her feelings for Senpai to Osana, and begs her to stay away from him. Osana hesitates but ultimately decides to adhere to Ayano's wishes. The cutscene then ends, with Ayano successfully befriending Osana, and promising to take good care of Senpai.

All rivals have the same befriending elimination: a photographer and an asylum.

After befriending her rival, Ryoba opens her bookbag and reads her dairy. After seeing their most recent entry, about an evil photographer, Ryoba invites her rival to speak with her on the roof. They explain that the photographer is a man inside a mental asylum. Due to it being a test of courage for teenagers, the rival went to the asylum, before being confronted by the man and being forced to remove their clothing with a knife at their throat. Several lewd photographs were taken before the rival was able to flee. When night falls, Ryoba may enter the asylum. She is then tasked with avoiding the drunks, homeless people, and patients who inhabit the abandoned building, while she burns several duffel bags containing the photographs. Ryoba must then exit the asylum via the window she used to enter.

After the photographs are destroyed, Ryoba invites the rival to her house. She then prepares tea (with the option of drugging it.)

Ryoba gives the rival the regular tea, and sits back down. Ryoba then confesses her feelings for Senpai to the rival, and begs her to stay away from him. The rival hesitates but ultimately decides to adhere to Ryoba's wishes. The cutscene then ends, with Ryoba successfully befriending the rival. 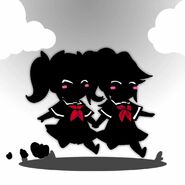