View source
watch 02:52
Roblox: DeepWoken - The Loop
Do you like this video?
Play Sound

Ayano's second bedroom as of the October 8th, 2015 Build.

Ayano's current bedroom as of the February 20th, 2019 Build.

Ayano Aishi's bedroom is the first location the player will start at and is currently the only starting point in the game.

As of the November 15, 2015 Build, the time, day, and current location are always shown in the HUD while inside the Aishi House. By default, it will be 6:30 AM before school and 8:00 PM after school and will not change.

At night, Ayano wears blue pajamas and can read manga, access the internet, or play video games. She can also visit the basement or visit Buraza Town, but cannot to go to school. Some activities will make Ayano go straight to sleep afterwards, and some will not.

The Senpai Shrine is located in the southeastern corner of the room. It includes multiple items of Senpai, such as a picture of Senpai, an apple Senpai has bitten into, a bandage used by Senpai, Senpai's toothbrush, boxers, chewed gum, pencil, hair, a button from his uniform, bento box and soda can.

The shrine starts empty. The player may collect items to put in the Senpai shrine. Currently, they can only access the chewed pencil.[1]

Ayano's panties can be changed before school at her dresser, which is located on the east side of the room.

Panties give certain boosts throughout a school day (only one pair is currently not functional). The White Panties are equipped by default. The other panties can be bought from the lingerie store, except for one, which is hidden somewhere in one of Akademi's Japanese gardens.

At night, Ayano can read manga at a bookshelf above her dresser.

Reading manga will level up a skill, but Ayano will miss out on any other nightly activities. Manga volumes must be collected before they can be read, and must be read in chronological order.

There are currently three manga series implemented in the game. Two of the series can be found at the manga store, and one is found in the Photography Club.

The corkboard is located on the north side of the room.

Ayano can place and arrange pictures she has taken with her phone and pins with red strings here. The corkboard will not affect gameplay; it exists for the purpose of immersion.

Ayano's computer is located in the northwestern corner of the room. She can only use the computer after school, and there are only four websites available.

Ayano can post rumors about an NPC on the school's social website. It is not fully implemented yet; there is only one correct thing to say that will affect someone else negatively, and the option to make posts only becomes available under certain conditions.

You can also use the computer to access Yancord, where you can chat with a person named Selene2005 once per day.

You can also visit a website that allows you to stalk someone in order to know what they like and what they don't like. In order to get one's information, you must have to take their picture first and then use it there.

You can also buy things from an online shopping website, but there are currently only two items available: a spare clean uniform, or blonde hair dye.

A collection of anime is located right to the computer and can be watched in the morning. Currently the only anime Ayano can watch is "Life Note", which shows how to perform the electric water fountain murder. There is only one episode for now.

At night, Ayano can play video games on the TV and SaikouStation 4[2] console, both of which are located on the table on the west side of the room.

Ayano's bed is located in the southwestern corner of the room. Sleeping here at night will make the game progress to the next morning. It cannot be interacted with during the morning.

In early 2015, Ayano could change her uniform in her room. Different school uniforms were used to give boosts. They were eventually removed as uniforms are now customized before you start a new game.

The door leading out of Ayano's bedroom is located in the northeastern corner of the room.

From here, the player can go to school (morning only), down into the basement, or to Buraza Town. If the player speaks with Osana about her stalker, then Ayano will be able to go to the Stalker's House (nighttime only) as a part of the Befriend or Betray Elimination.

The player can choose to bring 1 item to school in the morning. Currently, only 4 items are available; scissors, box cutter, screwdriver and rat poison. If the player brings the item to school and gets rid of it (eg. incinerating a weapon or poisoning a student with rat poison) then it will stop becoming available to take to school. 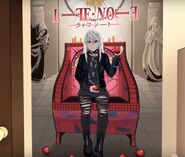 Ayano's new bedroom appearance in the April 2nd Bug-Fixing Build, designed and modeled by a volunteer.