This mode is a reference to the ongoing manga JoJo’s Bizarre Adventure. Collect all eight stationary objects and then press the Left CTRL key while standing on the rooftop to activate this mode. Once collected, Ayano Aishi will gain a white Stand with light pink trim and many hearts decorating its body. Several pink streams come out of its head. It does not move its limbs, but will follow Ayano within one meter.

In the visual upgrade, Bad Romance's design is more polished. She has narrower eyes, thinner hands, a small head, wider breasts, and a less skeletal backbone.[1]

This mode can be combined with another mode, but after that, the game must reset or the day must change to go back to normal (apart from Yandere-kun, DK Mode and Miyuki Mode).

Bad Romance plays a role identical to actual Stands in JoJo's Bizarre Adventure. In the description, Bad Romance is a guardian to Ayano and will defend her against anyone who tries to harm her. Bad Romance has no personal goals and will serve Ayano without question. The Stand has no personality and cannot speak; it does not have much learning or development potential.

As of the December 16th, 2016 Build, activating Bad Romance mode will give Ayano a different idle animation, making her lean to her left. The stand has its own animation with all of its arms flexing.

As of the March 26th, 2017 Build, if the Left CTRL key is pressed, Bad Romance will lean forward and unleash a flurry of punches.

As of the June 1st, 2017 Build, Bad Romance can punch and kill students. It can also hold various stationery objects, one for each arm, that can be found around the school.

The stapler inside the Counselor's Office. June 2nd, 2017.

The illustration.
Add a photo to this gallery 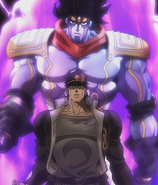 A Stand from JoJo's Bizarre Adventure. 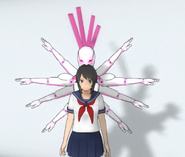 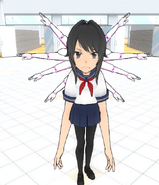 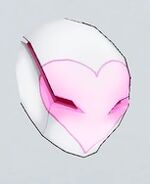 WIP of the Stand. An early WIP of Bad Romance.
Add a photo to this gallery

Retrieved from "https://yandere-simulator.fandom.com/wiki/Bad_Romance_Mode?oldid=477582"
Community content is available under CC-BY-SA unless otherwise noted.