View source
watch 04:03
Wiki Targeted (Games)
Do you like this video?
Play Sound
This page is for the male protagonist. For the female counterpart, please see Ayano Aishi.

Ayato Aishi, also known as Yandere-kun, is the male equivalent of Ayano. At this time, this student is merely hypothetical and does not actually exist.

"Many people have requested the ability to play as a male protagonist instead of a female. This would take a lot of extra time and money, since a male protagonist could not be added to the game without male equivalents of all of Ayano's animations and voiced lines. However, if it was to happen, what would "Yandere-kun" be like?

One possibility is that Yandere-kun - exactly like his female equivalent - is an emotionless boy who feels no reason to live...until he meets Senpai, and finally begins experiencing the same emotions and sensations that everyone else can experience. Yandere-kun would seek to eliminate anyone who threatens to take Senpai away from him, because Yandere-kun doesn't want to lose the one thing that makes him feel alive.

Another possibility is that Yandere-kun is a naturally sadistic person who requires an obsession to give his life meaning. He has marked a girl to be "his" - his property, his possession. He's hunting down anyone who flirts with Senpai because it's like a game to him...a game of death.

What kind of person will Yandere-kun be? Will there even be a Yandere-kun? Only time will tell."[3]

As of the March 8th, 2017 Build, a playable Yandere-kun is now available from the Easter Egg menu as an experimental mode. As he has not been fully implemented, NPCs will still address him as Ayano or Yan-chan, and his voice, such as when laughing, is still feminine. He will always wear Male Uniform 3, regardless of customization. Furthermore, his appearance will not change while wearing a gym uniform or school swimsuit, or while nude, though the censoring steam is still present. As he is just an Easter Egg, these things are to be expected.

As of the March 15th, 2017 Build, his hairstyle has been changed and his smirk has been removed. Instead, his expression is now stern and serious.

Yandere Dev wants him to be named with "Yan" in it so the name can be shortened to "Yan-kun", just like Ayano.

Yandere Dev initially considered naming him "Hayanari",[4] which means either "Falcon Success" (隼成) or "Great Force" (逸勢). However, since another character now has that name, this is likely not in his plans anymore. In this Reddit post, YandereDev also expressed positive opinion for the name "Yanosuke" (彌之助 or 弥之助), which has various meanings, but stated that, in his opinion, the best name would be "Yanagi", which means "Willow" (柳) [5], because it's short, snappy, and has a double-meaning to a type of knife, "Yanagi-ba-bōchō" (柳刃包丁), a Willow Blade Knife.

As of the October 31st, 2020 Build, Yandere Dev has confirmed his name in a blog post: Ayato Aishi. 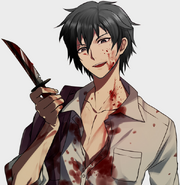 An old version of bloody Ayato.

An old version of normal Ayato.

A bloody variant of the Ayato body pillow cover.

Ayato in Yandere no Sutoka