View source
watch 02:05
Wiki Targeted (Games)
Do you like this video?
Play Sound

Ayano's Father is the husband of Ryoba Aishi and the father of Ayano Aishi.

Note: His name will eventually be revealed in-game. The name will not be spoiled on Twitter.[1]

He will be a character in 1980s Mode as a student attending Akademi High. He and his wife are out of the country for ten weeks in Story Mode[2] because his wife is chasing down The Journalist, as stated in Basement Tape #10.

Ayano's Father is planned to look like an adult version of default Senpai.[3] He has black hair and eyes.

In Story Mode, Ayano's Father appears as an adult man in his early fifties (50). As seen in the photo in the Aishi House, he has short bangs, and he wears a white, long-sleeved button-up shirt, tied with a black tie, and khaki pants with a brown belt.

In 1980s Mode, Ayano's Father appears as a young man in his late teens (18). As seen in the intro, in the flashback from Ryoba's school years, his bangs were long enough to cover his left eye, and he wore the default uniform.

Ayano's Father was born in 1971. At some point of his life, he began attending Akademi High School. He was in his first year from April of 1987 to March to 1988, and on his second year from April of 1988 to March to 1989. During his first and second year, Megami's Aunt was an upperclassman a year above him, but they never crossed paths. During his second year, his future wife, Ryoba Aishi, was an underclassman a year below him, but they had never interacted.

Eventually, in April of 1989, when Ayano's Father was 18, he collided with Ryoba Aishi during his first day of his third year of high school. Althrough they didn't even speak, Ryoba instantly fell in love with Ayano's Father, as he finally made her "complete". She began to stalk him, and quickly found out that there was another girl who was in love with him. To eliminate her first rival, Ryoba killed her in the girl's bathroom on the third floor.

After eliminating her first rival, Ryoba continued to stalk Ayano's Father, and began to stalk any girl that spoke to him, constantly finding a new rival. After eliminating them all, Ryoba planned to confess her love to Ayano's Father underneath the cherry tree behind the school, but she never had a chance due to The Journalist, who was able to convince the police to take her into custody.[4]

After being declared innocent by the judge, Ryoba again planned to confess her love to Ayano's Father, but the case casted a lot of suspicion on her and affected her reputation at school. Ryoba became worried that if she confessed to Ayano's Father, he would reject her, and then, she won't be able to resist the need for killing him and herself. Ryoba did not want to accept that outcome, so to reduce her chances of failure to 0%, she decided to kidnap him instead.[4]

As revealed in Basement Tape #1, Ryoba kept Ayano's Father in her basement and tied him to a chair, just like her mother did to her father. However, unlike her mother, Ryoba decided to not mind-break Ayano's Father, as she always felt slightly bad for her own father; instead, she kept him tied to a chair for a long time, until she was 100% sure that he would not try to run away and leave her. When Ryoba eventually forced Ayano's Father to being in "relationship" with her, he married her, took her surname, and moved out with her.

Due to a plot-related reason that will be revealed in "The True" ending,[5] his wife chose to give birth to a child so much later in life compared to the majority of her ancestors,[6] whom became parents at age 19-20. His daughter, Ayano Aishi, was born on 1st April,[7] currently, of 2004, when he was 33.

As revealed in an Intro and in Yandere-chan's childhood video, Ryoba told Ayano at some point that she was exactly like her when she was a child, and that, one day, she'd meet someone special who will "complete" her, just like she did. However, she never told her what she did in the past, as she promised Ayano's Father to never do it.[8] Because Ryoba always knew about Ayano's condition, she didn't worry about her at all, but Ayano's Father desperately wanted to help their daughter, which included taking her to hospitals, doctors, and on examinations. Ryoba tried to explain the condition of their daughter, but he didn't want to listen to her words. That was until Ayano began to pretend to be "normal".

Shortly before The Journalist began to follow Ryoba, a young woman casually flirted with Ayano's Father,[9] and Ryoba began to stalking her. She was probably a cashier at a convenience store, or a female co-worker of Ayano's Father.[10] However, there's no guarantee that she was actually in love with Ayano's Father, but as a yandere, Ryoba was so over-protective of her husband that she assumed any girl who was moderately polite to him was in love with him.[11] She was suspicious of any girl who seemed being too sweet to her husband, but didn't always took action, and likely murdered a handful of times between 1980s Mode and Story Mode.[11] It wasn't revealed whether or not Ryoba actually killed this woman.

As revealed in Basement Tape #10, Ryoba came back to her house after following the Journalist, and there, she caught Ayano's Father browsing their old tapes for an unknown reason. Ryoba told Ayano's Father that she "saw someone who she haven't seen in decades", mistaking his curiosity with jealousy, and then informed him they are going to America. When Ayano's Father protested and asked about their jobs, Ryoba reassured him that she already called their boss and informed him about it, and he was "very" understanding. Ryoba's and her husband's jobs are currently unrevealed, but we learn about them in one of the game's endings, and it's known that technology is a huge part of Ryoba's job.[12] Ayano's Father reveals that this situation took place a day before Ayano's first day of second year of high school (currently, it would be 31st March of 2021, on Wednesday), and Ryoba expressed that she thinks if her daughter is anything like her, she'll have absolutely no problems whatsoever taking care of herself, and she hopes Ayano will meet "someone special" and have gotten a boyfriend by the time they get back, to which Ayano's father responds negatively, but quickly changes his mind after being intimidated by his wife. At the end, when Ayano's Father wanted to pick up the tapes so that Ayano would't find them, Ryoba told him not to bother, and that there's a part of her that hopes she does.

He seems to be a normal person. He has never said to love his wife, even after they were married. He lampshades this in Basement Tape #10.

Ryoba is devoted to Ayano's father, but he does not truly love Ryoba in return. The father heard about what The Journalist said about his wife. She kidnapped him against his will and held him hostage in her basement. They got married and had one daughter,[13] Ayano Aishi.

Even after having a daughter, the father is still afraid of his wife. For example, when he thinks he has accidentally said something wrong about their extremely quiet daughter, he quickly corrects himself before Ryoba can notice, implying that he still doesn't love her and fears her after all those years.[14]

He and Ryoba have argued over differing opinions towards Ayano's personality; Ryoba was not worried for Ayano, but he was. [15]

Ayano feels indifferent to both her parents.[16] The father suspects Ayano to be emotionless or just strange, but he does not know his daughter's true nature.[17] He's also a little creeped out and worries about her, but he still loves his daughter.[18] This is supported in Basement Tape #10, since he is concerned about Ayano living on her own.

Ayano's lack of emotions during childhood eventually led him into depression, and he would start smoking to cope.[15]

Nothing would make him happier than learning that his daughter is a normal girl. [19]

If he sees Ayano trying to romance a female Senpai, he may have a positive reaction, as it would mean seeing the end of the Aishi bloodline, which wouldn't be a negative thing in his eyes.[20] However, he may strongly discourage the relationship. His values come from Japanese society, where homosexual relationships are considered to be a social taboo by many.[21] If Ayano was in a hetero relationship with a male Senpai, the father would worry about the nature of the relationship, and how it began.[22]

A photo of Ryoba and Ayano's father from the game files. 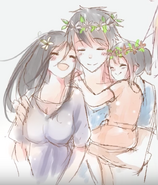 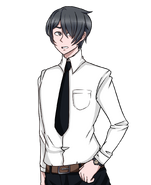 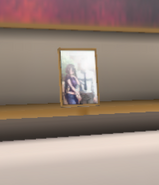 A photo of Ryoba and Ayano's father in the living room.

Ayano's father in the game's intro. 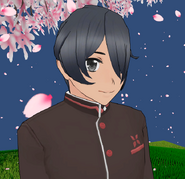 His face, from another angle (only viewable using external cheat codes: e.g. Pose Mod by kgftbz/AMZE)