Asu Rito is the fifth upcoming rival and a female student who will attend Akademi in Yandere Simulator.[3]

She is the leader of the Sports Club.

Asu has short blonde hair with a small ahoge and sky blue eyes. She wears black and yellow shorts under her skirt and black wristbands with horizontal yellow stripes. She has tanned skin and wears yellow swimming goggles. She has a black and yellow jacket tied around her waist and wears the "Red Armband of Leadership" with a person swimming on it on her left arm.

"Asu is the president of the school's sports club. She's the top student-athlete in the region, and many of her classmates predict that she'll be winning gold medals at the Olympics in a few years.

She won't actually appear at school until the fifth week of gameplay, but she will quickly make friends with Senpai. Senpai will be feeling drained after the last four weeks, and some exercise might be just what he needs to put his mind off of recent events.

Her cheerful and energetic nature makes it very easy for her to make friends - or find her way into someone's heart. Her easy going attitude and glowing smile might steal Senpai's heart in no time at all..."[4]

According to YandereDev, "She's perpetually positive and energetic." She could be described as a "Genki Girl".[3]

She has a competitive nature which drives her to achieve the best scores, leading her to have the third best test scores among the rivals.[5]

Though it is unknown at the moment, YandereDev has said that her routine will put her in close proximity to Senpai and other students, like her fellow club members.[6] During Asu's week, which is Week 5, there will be a sports festival, involving several different activities.

The topics Asu feels Negative/Positive/Neutral towards are as follows:

As she will be a rival in the future, she will have a crush on Senpai.

If she entered a relationship with Senpai, he would become an athlete.[7]

In the future, Ayano can matchmake Asu with her suitor, an unknown male student.

Asu knows nothing about Osoro, other than that she's a scary delinquent who allegedly beat up a number of people.[8]

An illustration of Asu.

An old illustration of Asu.[16] 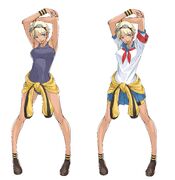 An illustration of Asu by kjech.

An old concept design for a sporty rival. She eventually became Asu Rito.

Asu's silhouette from "Yandere Simulator: Past, Present, and Future".

Another concept illustration of Asu.

Asu in What's Taking So Long?! Part 1: The Problems.

An illustration of Asu from the the third anniversary blogpost.

A male version of Asu from the Yandere Simulator Male Rival Introduction Video.

An illustration of Asu from the 5th Anniversary blog post. 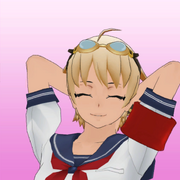 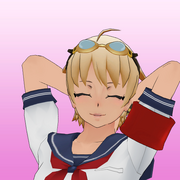 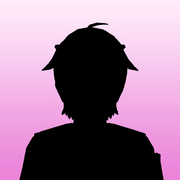 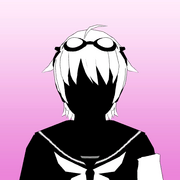 A reference image of Asu by Druelbozo. 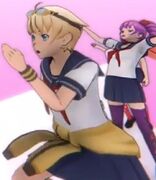 Asu in the Thanks For Playing cutscene at the end of the demo.