Amai Odayaka is the second upcoming rival and one of the female students who will attend Akademi in Yandere Simulator[1].

Amai has light brown, slightly wavy shoulder-length hair, pulled back by a light mint green kerchief and mint green eyes. She has a light mint green apron with a front pocket, along with white striped stockings of the same color. She wears the "Red Armband of Leadership" with a resemblance of a cupcake on her left arm.

"Amai is the president of the school's cooking club. Her culinary skills are far beyond her age, and nothing makes her happier than seeing people enjoy the food that she has prepared.

With her kind and caring nature, it's easy to see how Senpai could easily fall for her within a week's time. If nobody stands in her way, Senpai will belong to her in no time at all. Remember: the fastest way to a man's heart is through his stomach!"[2]

YandereDev imagines her as a "warm, gentle and kind-hearted girl". Amai is somewhat of a "big sister" or "onee-chan" type of character.[1]

Amai tries to focus on the positives rather than the negatives in people. As a result, most of her thoughts are positive and related to food.[3]

In unfamiliar situations, she can be shy.[4]

Though it is unknown at the moment, YandereDev has said that her routine will put her in close proximity to Senpai or other students.[5] As shown in the "Amai Challenge", there will be a bake sale during her week, where she will spend most of her time behind a table set up in the plaza, surrounded by the other members of the Cooking Club. In this time, the player cannot speak to her, and she will be surrounded by various people, making it difficult to eliminate her.

The topics towards Amai are (Negative/Positive/Neutral) as follows:

On the Saturday of Week 1, Amai was heading to the Odayaka bakery when she noticed that Senpai was feeling sad and alone on a bench at the bus stop. Showing concern for him, Amai asks Senpai to tell her what was wrong. Senpai tells Amai that his childhood friend had died, disappeared, been arrested for murder, been expelled, committed suicide, stopped attending Akademi, was rejected by him, already had a boyfriend, or didn't seem interested to spend time with him anymore, depending on the player's actions.

Amai offers Senpai a cupcake as compensation, which he graciously accepts and enjoys. Amai, still concerned for Senpai, offers to take him to her family's bakery. At first, Senpai refuses due to not wanting to bother her, but goes thanks to Amai's insisting. At the Odayaka bakery, Amai continues to comfort Senpai, talking to him and making him laugh. This interaction initiates the start of their bond.

Like all rivals, Amai has a crush on Senpai and will confess her feelings to him on the Friday of Week 2.

If Taro entered a relationship with her, she would convince him to join the Cooking Club.[6]

In the future, Ayano can matchmake Amai with her suitor.

Amai loves her mother and helps her out at her little bakery.[7] The bakery is present in Buraza Town. When you go to town, you can see the bakery behind you.

Amai fully trusts Shoku Tsuburaya to run the cooking club while she is absent.

Main article: Info-chan
This section contains spoilers. You have been warned!
During Amai's introduction cut scene, Info-chan tells Ayano to make Amai suffer, exactly like she told Ayano to make Osana suffer. Her reasoning for doing this is unknown. However, it suggests that perhaps Info-chan just wants to see the students, Amai and Osana included, suffer.

She is the leader of the Cooking Club, and, like other club leaders, will allow the player to join the club if the player talks to her. If she dies, or less than five members of the club remain, the club will shut down. Any club members who witness the player's crimes will report to her, and Ayano will be either kicked out or be unable to join the club. In the future, if the club has disbanded before her designated week arrives, there will be a short cutscene in which she expresses some very sad feelings.[8]

Once the player has completed the demo, there will be a button prompt at the bottom of the calendar screen for "The Amai Challenge". The goal is to kill Amai and dispose of her corpse without alarming any other students. Even though there is no reward, this challenge offers a glimpse into Week 2, allowing us to see how she will be different from Osana.

This is how the Amai Challenge works: 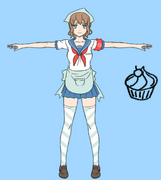 Amai's silhouette from "Yandere Simulator: Past, Present, and Future".

A preview of Amai from "September Progress Report".

An old illustration of Amai.[19]

Another old illustration of Amai.[20]

An illustration of Amai by kjech.

Amai in What's Taking So Long?! Part 1: The Problems.

An illustration of Amai from the the third anniversary blogpost.

A male version of Amai from the Yandere Simulator Male Rival Introduction Video.

An illustration of Amai by kjech.

Another illustration of Amai by Kjech.

An illustration of Amai from the 5th Anniversary blog post 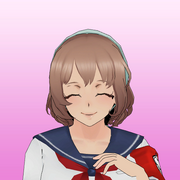 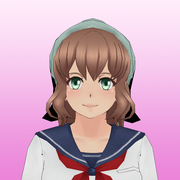 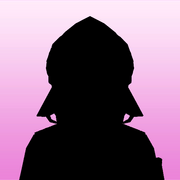 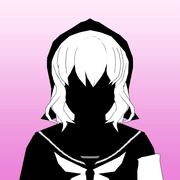 A reference image of Amai by Druelbozo. 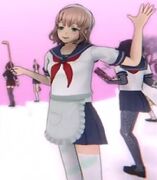 Amai in the Thanks For Playing cutscene at the end of the demo.

Amai playing with her phone before classes in Amai Challenge.