View source
watch 02:56
Raise a Floppa - The Loop
Do you like this video?
Play Sound

Akane Toriyasu is one of the female students who currently attends Akademi. She is the Secretary of the Student Council.

Akane has long, scarlet hair tied into a ponytail at the front. She also has two orange feathers behind her left ear. She wears a see-through, lace garter belt. She has thin eyes[1], and if they are opened, they are orange. Her bust size is 1.5. She wears the "Red Armband of Leadership" on her left arm reading 生徒会 (seito kai), meaning Student Council written in kanji. As of the May 19th, 2021 build, she now has orange eyebrows and pinkish glossy lips, as well as a bit of a blush around her eyes. She now also has a band in her hair that keeps it tied together at the front. Previously, it looked like her hair was tied together with another piece of hair instead of a band.

Among the personas currently implemented in the game, Akane is Dangerous. If she sees Ayano murder anyone she will run-up to her, spray her with pepper spray, and restrain her. She will push Ayano away gracefully if she gets too close and will spray her with pepper spray if she attempts to kill her without stealth or if she gets too close to her five times. She will break up fights between Ayano and a delinquent by politely asking them to stop fighting. If Ayano aims her phone at Akane, she'll stand still but will show no reaction. Intimidation will also not work on Akane if Ayano attempts to intimidate her when she has joined the delinquents. Akane is also not affected by seduction.

Akane is known for being gentle, friendly, and an airhead. She also patrols the clubrooms to find anyone who needs help. However, there are rumors that her personality is a facade.[2] But, according to Yandere Dev, the rumors have not been confirmed.

Akane enjoys preparing and learning about teas from various cultures.[3]

"Akane Toriyasu is the Secretary of the student council. She's known for her gentle and friendly personality, but is also known for being a bit of an airhead - which makes it a mystery why Megami decided to appoint her to the Student Council.

As one of the most beautiful girls in school, Akane has a very large number of male admirers. Often, her presence alone is enough to diffuse a troublesome situation. Perhaps this may be part of the reason why Megami decided to include her on the Student Council."

"Secretary of the student council. Seems ditzy and airheaded at first glance, but has never failed in her duties. She has a very large number of male admirers."

At 7:00 AM, Akane leaves the Student Council Room and will begin patrolling all the clubrooms around the school, starting with the Cooking Club.

On Fridays at 3:30 PM, Akane will go to the Meeting Room and meet up together with the rest of the Student Council and all the club leaders to have a meeting.

If Akane is fired in Mission Mode, she will eat lunch in the Student Council room instead of patrolling the school which enables the player to poison her. Furthermore, firing her allows the player to interact with Akane like any regular student.

The topics towards Akane are (Negative/Positive/Neutral) as follows:

Akane with the rest of the Student Council.

Akane in The Student Council in Yandere Simulator (Story Focus).

Akane in the 4th Anniversary Blogpost.

An illustration of Akane from the 5th Anniversary blog post 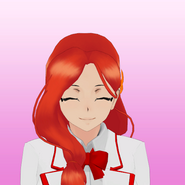 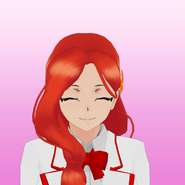 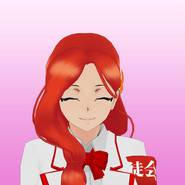 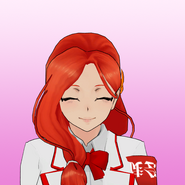 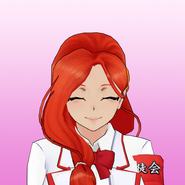 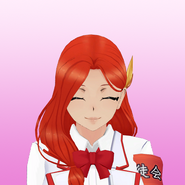 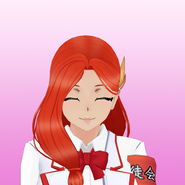 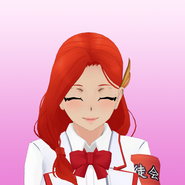 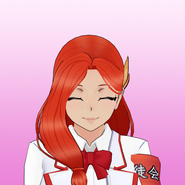 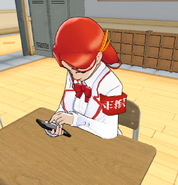 Akane playing around on her phone before her classes start in-game.

Akane in the Meeting Room. 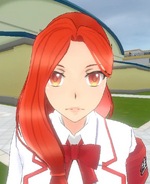 Akane in-game with her eyes open.