47 Mode is an Easter Egg Mode in Yandere Simulator.

This mode is a reference to the Hitman series. Press L to activate this mode. It cannot be deactivated until the game is reset or the day ends. Once pressed, Ayano will resemble the main character Agent 47. 47 Mode will make her bald, put a bar code on the back of her head, and change her uniform to a black jacket with a red bow. The song, Ave Maria will play the entire time.

The song Only You Can Stop Them, used to play the entire time. This music was eventually replaced due to copyright issues.[1] 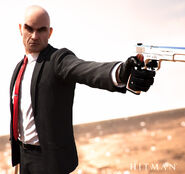 The illustration of Agent 47 from Indestructible Rival 2.

Agent 47 bar code.
Add a photo to this gallery

Retrieved from "https://yandere-simulator.fandom.com/wiki/47_Mode?oldid=497845"
Community content is available under CC-BY-SA unless otherwise noted.